And They'll Know We Are Christians By Our... 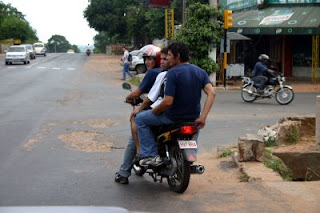 Last Monday was a long day for me. When Cora got out of school I was hot and tired and more than ready to go home and take a nap. As I started to back the car up to leave, however, I felt a slight bump and heard the sound of something falling to the ground. I jumped out of the car to discover that a motorcycle had been parked directly behind me and that it was now laying on its side leaking fuel or something. A couple of women witnessed the incident and helped me to upright the bike. I asked them if they knew who the owner was. They did not know and actually encouraged me to hurry and leave before he came back. That would not be an uncommon thing to do in Paraguay, and I was actually tempted for a second. However, much to their surprise, I decided to continue to look for the owner. After a few minutes he came out of the school. I explained to him what happened, but he seemed not to be phased by it. In the presence of the women I told him that if he discovered a problem that he could find me at the school most days. Unconcerned, he rode off while the women continued to stare at me in disbelief. 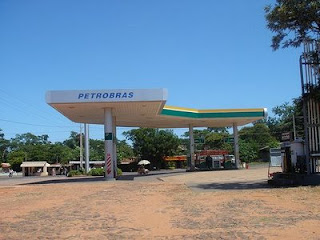 When I finally got back in the car, I noticed that I did not have enough gas (actually, diesel) to make it home. So, I stopped by the closest service station to fill up. The total came to 340,000 guaranis, which is the equivalent of $68. That is a lot of money, especially here. I handed the attendant my credit card to pay the bill. He came back and told me that the credit card machine was down. I hardly ever carry that much cash on me, so that put me in a bit of a bind. I then spotted an ATM down the street and asked if I could go get the money from there. This was agreed to as long as the attendant could ride with me. He hopped in and I drove down a block to the ATM. I could not believe it, however when the screen announced that the machine was Fuera de Linea (off line).

The attendant and I drove back to the station to discuss the problem with his boss. I told him that I passed by the station every day on my way to work at a Christian school and that he could trust me to come back to pay. Of course he was reluctant to trust me and explained that he needed to have all money accounted for by the end of the day. I sympathized with his situation and continued to think of a solution. It then occurred to me to call Emily, a short-term missionary working at the school. She lives in the apartment over the school, thus was nearby. I called her and asked if she had the money. Fortunately she just happened to have 400,000 that I could borrow. I reported this to the boss and told him I could go right over there and get the money. He thought that was a great idea, but again insisted that another attendant ride with me.

On the 5 minute ride to the school I had the opportunity to talk with the young man and share Christ with him. He seemed surprised that as a "Cristiana" that I was not condemning him for his Catholicism. I mostly shared the importance of a personal relationship with Jesus Christ. He was also surprised that when we pulled up to the apartment, that Emily actually gave me the 400,000 without question and trusted me to pay it back to her.

As Christians it is not so much what we say that affects people as what we do. It is my hope that even though I was hot, tired and frustrated, that a little of God's grace was able to show through me that day.