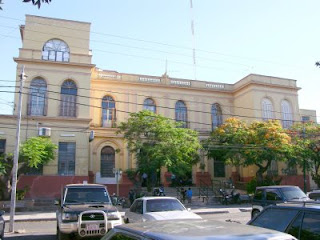 Last week Donald and I went to visit a church member who has been in the hospital for several days. His name is Domingo, or "Mingo" for short. He is 19 years old. He went in the hospital for a surgery and while there developed pneumonia. He is also in need of a kidney transplant.

The hospital that we use here is a private Baptist hospital. It is not quite the same as the ones in the States, but very close. We pay more than the public hospitals, but receive care in a clean environment with qualified physicians. In the 8 months that we have been here, we had never visited a public hospital. We knew they were much poorer, but did not know quite what to expect.

The hospital is called "Hospital de Clinicas" and is connected to the university where doctors are trained. From the outside it did not look too bad. Upon entering, however, I came face to face with the realities of health care in the 3rd world. 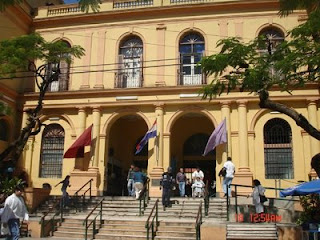 Since Cora was not allowed in, Donald volunteered to stay with her 1st while another church member and I went in to look for Mingo. She was unable to reach his mother's cell phone, so we started wandering around looking for him. There was no central place to ask, so we just started by questioning "official" looking people as they passed by. The hospital is not a single building. Instead it is sort of a campus of connected buildings. We wandered freely from building to building through rooms looking for him. We went through several rooms that were filled with half-clothed patients laying in thin metal rollaway beds. There was no sense of privacy or sanitary precautions. We also passed by people who evidently were waiting for beds. They were laying on the floors and benches both in the hallways and outside on the ground.

After what seemed like an eternity we were finally able to contact Mingo's mother and found out where he was. His room was no different from the others. It contained about 20 men lined up in beds against 2 of the walls. There was also a metal cabinet next to Mingo's bed that had cockroaches climbing in and out of it.

I found the following picture on the Internet. It shows the inside of the hospital. I did not notice any privacy curtains while I was there! 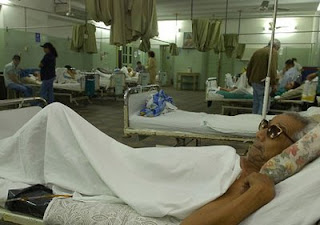 We prayed with Mingo, then I went outside with Cora to give Donald a turn. While waiting, I noticed a plaque that showed that the hospital had been built in 1894. It is almost 115 years old! That explains part of its condition, but not quite.

As I pondered what it would take to change the medical care of Paraguay, Cora pointed out something to me. Patients were actually being pushed to another building in their rollaway beds down a car filled street while passersby gawked and laughed. It will take much more than modern equipment to bring about change, a whole new mindset will need to come about. That will require education and a lot of prayer!
Posted by The Paige Family at 4:00 PM