We are Finally Here! 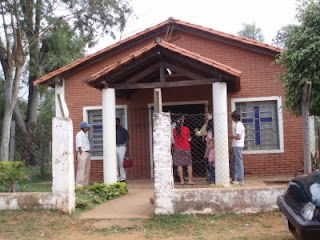 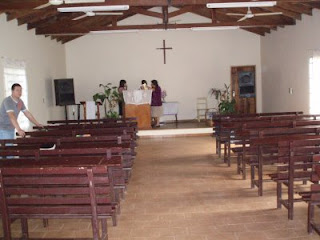 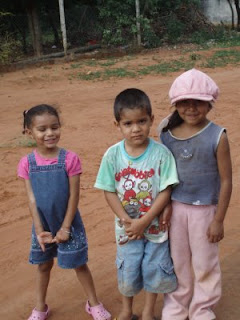 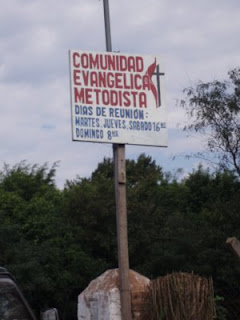 We sent out an email update last week to let everyone know that we have finally made it to Paraguay. If you would like to be on our email list, send your address to capaige@yahoo.com.

Since there is so much to write about every day, we will try to highlight a few things at a time. Last Sunday we went to the 2 Methodist churches that are closest to our home in Luque. One meets in the morning and the other in the evening.

The church that meets in the morning has about 25 people who attend regularly. A year ago it was a dying church and was down to a total of 4 people. That was when Pablo Mora, the president of the Methodist church in Paraguay appointed his son-in-law as its pastor. Everyone there was very welcoming to us. All the pictures above are of that church.

There are about 30 people who attend the other church. We did not get any pictures last Sunday, but it only has 2 walls and a roof. Tarps serve as the 3rd wall. They do, however have a drum set, electric guitar and keyboard. The music there is very lively and reminds us of our church in Costa Rica. We can definitely feel the presence of the Holy Spirit there!

Both churches have many children. Cora has enjoyed playing with them all. However, when it comes time for children to leave the service for their program, she gets shy and refuses to go. We are sure that will change as we continue to go and she gets more used to everything.

The following video is not very good because it was done on our small camera. It shows the road on our way to church. This road is typical for the area. This is also why we need to buy an SUV!

Posted by The Paige Family at 7:38 PM No comments:

We apologize for the amount of time it has taken to get an update out. It is hard to believe that we have already been in Paraguay for 2 1/2 weeks. We have been so busy finding our way around and trying to acclimate ourselves to our new surroundings, that we've hardly had the time to sit down at the computer and let everyone know how we are doing. The biggest problem with that is that practically every day there is something new to share.

We landed in Paraguay on July 1st after a long, tiring 16 hour plane trip. Because of a short connection, all of our luggage arrived the next day. We are staying in the home of a missionary family who will be on furlough in the States for the next year. They were here with us for the first 8 days in order to help us get settled and to get acquainted with their animals. We are taking care of their 2 dogs and 2 cats while they are away. The dogs are Brazilian Mastiffs named Charis and Tigressa. Standing up, they look eye to eye with Cora. They are huge and very protective of family. It took about 4 days for them to accept me and Donald. It took a little longer for them to accept Cora. Now, however, they love all of us. The cats are named Captain Hook and Tinker Bell. Tinker Bell is a bit skittish, and still won't let us near her. Captain Hook loves attention, and Cora gives him more than enough.

Living here is like learning how to live all over again. Right now we are spending time learning things like how to wash clothes, shop, pay bills, use cell phones and drive. Driving is a bit intimidating, because nobody follows the rules. For example, it is very common to see drivers making 4 lanes out of 2 and turning left out of the right lane. There is a lot of honking and pushing your way around. It seems that whoever is the most aggressive and has the biggest vehicle has the right of way. Donald has been doing a good job of driving, but I still haven't attempted it.

Another thing that makes driving difficult here is that the roads are pretty bad. There are some main roads that are paved, but as soon as you turn off of them, they are very bumpy with many potholes. The roads are so bad that you need to take your car in once in awhile to get all the nuts and bolts tightened.

Thank you to everyone who has been keeping us in your prayers. We can definitely feel them! We feel very blessed to be here in Paraguay and learning more about the people God wants us to serve. The 1st week that we were here, we were able to make a connection with a family who owns a printing business in Asunción. They are from Argentina, but have been living here for over 20 years. About 2 years ago, their teenage son, Dante, became a Christian. He then led both his parents and younger sister to Christ. They are on fire for the Lord and have begun an Alpha course in their home. Alpha is a 15 week course on the basics of Christianity. It is an excellent opportunity for people to learn more about Christianity whether they have been believers for many years or are still seeking. Our home church, New Town UMC has been doing this course for years and we have participated in it several times.

They were beginning the course the evening we met them, so we were able to get involved right away. We have had 3 meetings so far. There are about 20 participants, with the majority of them being unsaved. Donald and I were put into different small groups. It is sometimes hard to follow all of the conversations, but we have both observed good questions being asked and hearts hungry for the answers. This will be a great opportunity to learn from the Christian leaders in our groups as well as participate in the transformation of lives.

Other than Alpha, Donald and I have also begun learning about other opportunities for us to serve. I have met with the director of the school that had been praying for a social worker. Next Wednesday I will be going to the school in order to meet the staff and go over what their needs are and how I can best serve them. Most likely I will begin helping them with their registration process in August by going out to the homes of perspective students and helping to assess their level of school-readiness. I am also anticipating that being in the homes will open up doors for sharing the Gospel.

Donald has found out some contact information on 3 different silversmiths. One he met in downtown Luque (the town where we live and main area for silversmiths), and he told Donald that he would show him around sometime next week. Another one is the brother-in-law of the brother-in-law of our doctor here. Evidently he is very well known and lives in a wealthy area of Asunción. Donald has his address and is planning on visiting him next week as well. The last silversmith contact is an unsaved friend of a man that one of our missionary friends has been discipling. He would like Donald to meet his friend in order to share about silversmithing as well as potentially share about Christ.

As far as churches, we have had the opportunity to visit 3 different ones so far. There are 2 here in the town of Luque that we will probably end up serving in. One meets in the mornings and the other in the evenings on Sunday. We will update more on them after tomorrow!

Last, but not least, Cora seems to be adjusting here alright. She loves having pets and enjoys jumping on the trampoline that is in our backyard. She has also made a few friends at the Alpha group and has bonded with the little girl of one of the missionaries we have met. There is a Paraguayan family who lives next to us that has a little girl her age, but we have not met them yet.

Cora has had a couple of setbacks, but they have not seemed to slow her down any. Last weekend she became sick with a cough, runny nose and fever. On Monday we took her to the doctor and she was diagnosed with bronchitis. She was then put on antibiotics (which can be bought over-the-counter here). We feel that it was a blessing that she started taking the antibiotics when she did, because 2 days later she got bit by a stray dog.

We had gone out to the Methodist seminary in order for the leaders of the Methodist church to meet and greet us. While we were in the meeting, Cora was out in the yard playing with a little girl who lived on the property. A stray dog had wandered onto the property, and both girls went up to it. It then ended up biting Cora on her cheek and upper lip. We took Cora to the emergency room (where they told us to start her on antibiotics right away) and then to another place to get a rabies shot.

Our field leader was with us the whole time and had asked around the neighborhood about the dog, but nobody was willing to claim it or knew if it had its vaccinations. The family at the seminary said that it would keep an eye on the dog for 10 days in order to make sure it did not have rabies. Yesterday, however, our field leader called us and said that they had found the dog shot dead and laying in a ditch. Fortunately they were able to cut off its head and take it to the rabies center where it was found that it did not have rabies.

We praise God that Cora was not hurt badly and that the dog did not have rabies. We also thank God for the provision of good medical care and other missionaries and nationals to help us through our transition here. We especially thank God for all of our friends and family who have been supporting us through prayers and finances. Without you guys, we would not be here.

After this email, our next step is to start updating our blog. That way you will be able to check it whenever you want and won't have to read long emails! We will also be posting some videos and pictures. If you would like to see a few pictures of the home, car and pets that we will be taking care of for the next year, click the following link and enter the password "paraguay" :

Posted by The Paige Family at 9:52 PM No comments: