Paige Mission Video...Fresh off the Press!

We just finished our new mission video and posted it on Youtube. Check it out! 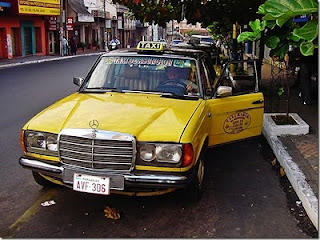 About a week ago we were returning home late from a wedding on a Saturday night. It was about 11:45 pm and we had stopped at a traffic signal at a busy intersection. Just as the light turned green we noticed a taxi coming toward our car from the gas station beside us. Donald honked the horn, but the taxi did not stop. It went right across the front of our car, taking off the bumper and damaging the grill. It was at that point that we noticed that there was no driver!

To appreciate the significance of this story, I need to share something. There was already damage to the front bumper and grill of the car. Also, even though we really could not afford it, we had planned on taking it into the shop that Monday to be repaired. Since Cora is still on summer vacation, it would have been easier to do without our vehicle for a week. Still, we were praying about how the repair would affect our finances and if it was okay to spend the money.

When the taxi hit our car it only damaged the parts that we were originally going to pay to have repaired. The taxi driver ran into the street and jumped into his car, but he did not try to leave the scene. Two police officers witnessed the accident and were very helpful. The taxi was also insured! All of these things we consider to be miracles, especially here in Paraguay.

So now, the repair of our car has been paid for by the insurance company. Coincidence or God's provision? You decide.
Posted by The Paige Family at 10:36 PM No comments: