We Got Our Drivers Licenses! 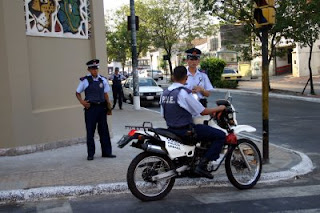 For 7 months we went around to the magistrates in different cities trying to get our driver's licenses. All of them told us that we needed to have our residency card before we could get a license. Well, as many of you know, our residency process is taking a LONG time without a resolution in the near future. So, what have we been doing?...

...Driving Anyway! Where we live is at least a 30 minute drive to many of the places we need to go and even longer by bus. In Costa Rica the buses were a great option for us, but here they are a lot more dangerous. There are robberies and injuries reported every day. The bus drivers do not drive well at all and some barely stop to let you off.

The downside of driving without a license is that if stopped by the police, a big fine is paid and they may even ask for a bribe. We have been blessed to have never been stopped, which is pretty unusual.

Anyway, as a last ditch effort and with a lot of prayer we went with a Paraguayan friend to yet another magistrate to apply for licenses last Wednesday. To our delight they told us it would not be a problem. We gave the main secretary copies of our passports and the results of our blood type, hearing and vision tests. Our hearing test had been pretty sophisticated; the doctor put his wrist watch up to each ear and asked if we could hear it ticking!

After we gave the secretary all the paperwork, we had to do a written test. Our friend, Angelica told them we didn't speak much Spanish and was allowed to interpret for us. We went to a room with 2 guys and her. They handed us a piece of paper with 10 multiple choice questions about road signs. We were allowed to miss 3 and I missed 1. Donald, on the other hand took advantage of all the help he could. In the end all 4 of us in the room were helping him with the questions. He did not miss any questions! They were pretty impressed.

After the test we were told to come back on Friday. The computers were down from a storm and they could not enter our information. On Friday we came back and did a lot of waiting while the paperwork was processed. It was kind of interesting to sit and watch the goings on in the building as we waited. We definitely knew we were not in the States!

The first thing we noticed was the huge dog sleeping on the floor. When we asked about him, we were told that he was the boss' dog and that he came to work every day. It was also funny to see a man come in selling a stack of bootlegged DVDs in front of the police officers. He might have even been selling them to the police officers.

After it took about an hour to process our licenses we went to another place in the building to wait for a judge. Evidently she needed to look over our paperwork to make sure we did not pay more money than we should have. We didn't, and that was good. When we left, however, I was wondering if she even thought about the legality of our whole license process.

Regardless we are now legal to drive both cars and motorcycles and no longer need to worry about being pulled over for a year.

The next big hurdle is our residency process!
Posted by The Paige Family at 11:13 AM