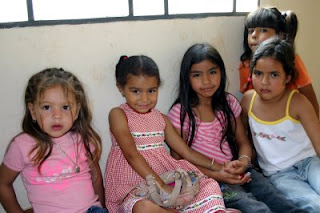 Whenever God does something in our lives, it is important to share it. Not only does it encourage and build faith in others, it testifies to the power of God. Our God is all powerful and there is nothing, I repeat, nothing impossible for Him!

Two weeks ago Cora fell at a friend's home and hit her mouth. After that, one of her front teeth was loose. We took her to a dentist, but she said that it was not loose enough to worry about.

Well, last Wednesday we had gone to Burger King (yes they have them here!) and Cora was playing on the playground. We were just getting ready to leave when Cora came running up to us crying. Her mouth was bleeding and her tooth had been knocked way back. It was not a pretty sight!

At that moment I got angry. It was a righteous anger against the enemy that welled up in me. Since we have been here, it seems like something different has happened to Cora every week. Either it is coincidence, or the enemy has been attacking in his subtle way. Regardless, Donald and I prayed for Cora and the bleeding stopped immediately.

Since it was evening, we could not take her to the dentist until the next day. That night we laid our hands on Cora's mouth and prayed for her tooth again. The next morning when I checked her tooth, it was back to where it had been before the accident! There was no need to call the dentist.

Miracle or Coincidence? Just ask Cora. She will tell you that Jesus healed her tooth.
Posted by The Paige Family at 8:15 PM