Crowds gathered also from the towns around Jerusalem, bringing their sick and those tormented by evil spirits, and all of them were healed. Acts 5:16

Today we had the opportunity to help translate for a short-term team who came to run the mobile medical clinic at Cristo Viviente (one of our churches). The team is from Buffalo, New York and will be in Paraguay for 2 weeks. They will be at our church through Friday. Word got around the neighborhood fast as people formed lines waiting to be seen. There were 2 pediatricians, a dentist, an optometrist and 4 nurses. There was also an area that was set up as a pharmacy.

We checked the forecast on the internet before leaving home and it called for a 90% chance of rain all day. Rain poured down as we arrived and gathered to set up. The first thing we did was form a circle and pray. The pastor prayed specifically that the rain be sent away from that particular area so people would come and be seen. As soon as we said "Amen," the rain stopped. There was not one more drop of rain there for the rest of the day!

Donald helped with the organization of the people waiting. I helped translate for one of the pediatricians. It was a true blessing. Many people received medical treatment, medications and prayer.

A young woman named Angela came with her new 12-day-old baby. She was worried about him spitting up. The doctor examined the healthy baby and determined it was simply mild reflux. The 17-year-old mother then shared that he was her only child because her previous baby died of an infection at 7 months of age. She was fearful that the same thing would happen to her new son. The doctor and I both agreed that the mother needed prayer.

After the exam I asked the pastor's wife to pray with me and Angela. She shared with the young mother about fear and the One who can take away our fears. Tears of joy filled my eyes as I watched Angela accept Jesus as her personal Lord and Savior as her son slept peacefully in her arms.

This is why we are here! 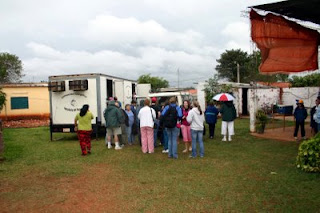 Posted by The Paige Family at 9:02 PM